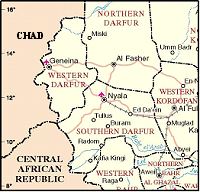 The Sudanese Government has rejected the UN Secuirity Council decision to send a large peacekeeping force to protect the people of Darfur. Instead they claim to be sending government troops themselves. Well... they have, and a few days ago they began bombarding several towns in North Darfur (at least two that I have visiting in the past). People are dying and the international world seems stuck in place.

Here are a couple of things that are happening to make some noise.

1. Add your voice to this letter to demand action


2. Think about doing something on September 11th - people around the world will be joining rallies for Darfur and will wear blue hats to symbolize the UN peacekeeper blue helmet. If we don't get a group thing going here, I'll at least wear a blue hat and talk about it that day.

Thousands of people are still losing their lives...

Despite the signing of a Darfur peace agreement on 5 May 2006, the violence in western Sudan has not stopped; in fact, in some parts of Darfur, the violence has grown worse.

People are still being killed and raped and displaced - every single day.

On September 17 people around the world will take part in the Global Day for Darfur to show world-wide support for the Darfuri people and to put pressure on our Governments to protect the civilians.

We hope that you will be able to join us on the Global Day for Darfur.
Wear a blue hat on September 17th

Comments:
Gary, it would seem that the sudanese gov't is 'quickly' trying to kill off more people before the UN peace keepers get there. Short of an immediate intervention, I do not believe that we can do anything but watch helplessly.
Ingrid

Yeah, but the work to get troops in there has to happen. It's time to make some noise.

I have photos of beautiful children in those towns - if one of them is spared by getting some action at some point, it's all worth the effort.

I live in Nelson BC Canada. I have one lovely Anna, two adult kids (in New York and Montreal), a small house in downtown Nelson, an interesting career as a consultant and lots of other interests, including working for human rights (through Amnesty International and Peace Brigades International mainly).

Give peace a chance

Political, funny and or cool

< Billionaire Boom - (but a billion isn't what it us...
Graffiti of the week
Newspaper column for this week...
In the mood for a new season yet?
Darfur still simmering horribly...
Some war...
Hummingbirds again...
Toronto hosts HIV/Aids conference
Interesting graffiti
WATER WATER EVERYWHERE...